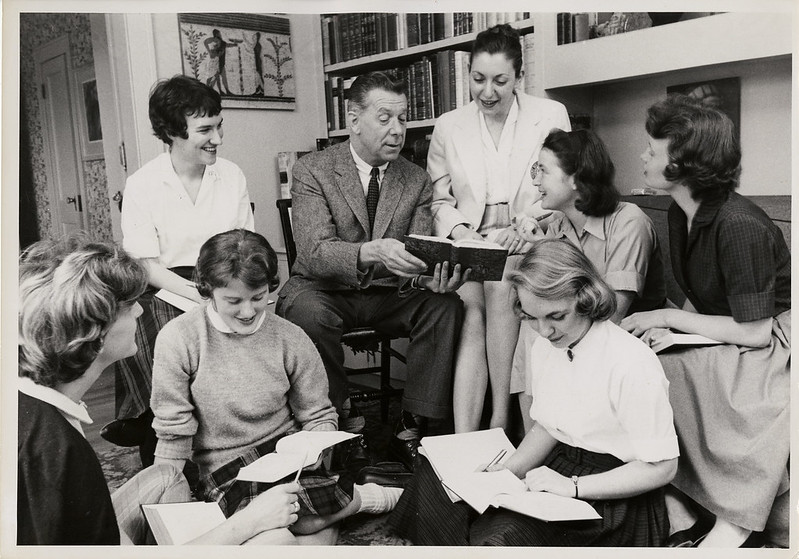 Professor Giamatti was born in 1911 and received a Ph.D. from Harvard University and a laurea from the University of Florence, Italy. A beloved professor, he taught at Mount Holyoke until 1973, when he retired. He died in 1982 at the age of 71.

Professor Giamatti and his wife Mary Walton (1914-2006), a graduate of Smith College, had three children. Their son Angelo Bartlett “Bart” Giamatti (1938-1989) became President of Yale University in 1978 and Baseball Commissioner in 1989, only months before his sudden death. Angelo is the father of actor Paul Giamatti.

Professor Giamatti was a collector of antiques and over 200 editions of Dante’s Divine Comedy (view some selected book covers). His collection survives in the Mount Holyoke Archives.

The Valentine Giamatti Lecture has been given since the late-1980s in honor of Dante scholar Valentine Giamatti, a professor of Italian at Mount Holyoke for more than 30 years. Past Giamatti speakers include authors Amara Lakhous (2017), Jhumpa Lahiri (2016) and Carmine Abate (2015), Dacia Maraini (2014), and journalist Lucia Annunziata (2012).

The 2021 Giamatti lecture featured Guy Raffa from The University of Texas at Austin. Watch the video.

Author Jhumpa Lahiri was the speaker.

The 2018 Giamatti Lecture and Event

2018 Giamatti speaker, Amir Issaa gave a book presentation and mini-concert: "Vivo per Questo (This is What I Live For)"

2017 Giamatti Speaker Lakous describes his experience as a multilingual novelist exploring identity in the immigrant experience.

Ombretta Frau interviews Lahiri about her provocative exploration of the power of language to transform—and reinvent—one's voice and sense of self.

2012 Giamatti speaker Lucia Annunziata made headlines when her questions led Prime Minister Silvio Berlusconi to walk off set in protest.

A complete reading of Dante’s Divine Comedy with a talk by Neil Proto, author, and an intro to the Valentine Giamatti Dante collection by Leslie Fields.

LIsten to Italo Calvino' and President Liz Kennan's remarks in Abby Chapel on that occasion: