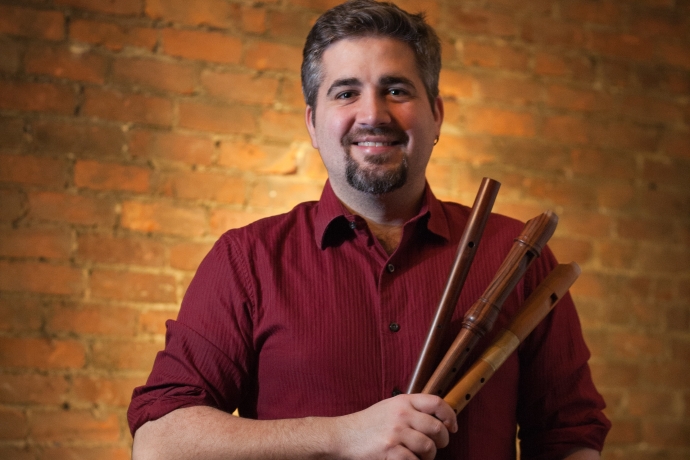 A versatile multi-instrumentalist, Dan Meyers has developed a reputation as a flexible and engaging performer of both classical and folk music; his credits range from premieres of new chamber music, to headlining a concert series in honor of Pete Seeger at the Newport Folk Festival, to playing Renaissance instruments on Broadway as part of the “band” for Shakespeare’s Globe. He is a founding member of the Boston-based early music/folk crossover group Seven Times Salt, and also performs throughout New England with the 7 Hills Renaissance Wind Band and the medieval music ensemble Meravelha. In recent seasons he has appeared with The Folger Consort (Washington DC) The Newberry Consort (Chicago), The 21st Century Consort (Washington DC), The Boston Shawm and Sackbut Ensemble, Early Music New York, In Stile Moderno, The Henry Purcell Society of Boston, the Cambridge Revels, and at the La Luna e I Calanchi Festival (Basilicata, Italy). In addition to his teaching for the Five Colleges, he has taught recorder and Renaissance winds for the Early Music Week at Pinewoods and at Tufts University. He also performs southern Italian folk music with the award-winning band Newpoli, and traditional Irish music with the bands Ulster Landing and Ishna.