Visit the campus updates page for information on Mount Holyoke's response to the global pandemic. The Opening the Gates site contains details about the spring semester.

The class of 2017 will change the world

Change — and a hint of defiance — was in the air Sunday morning when more than 550 students filled the Gettell Amphitheater for Mount Holyoke College’s 180th Commencement ceremony.

As the soon-to-be graduates, each bearing a green rose in honor of their class color, prepared to walk through Mount Holyoke’s iconic gates into the world beyond, they were girded with a message from the keynote speaker, labor leader and activist, Dolores Huerta, who told them to live with intention and to work to bring positive change.

“You can’t take it with you,” she said, encouraging the graduates to be successful but not materialistic. “What do you want to leave behind? You want to leave a legacy of justice.”

The class of 2017 applauded and cheered, joined by friends and family as its members gathered to receive the degrees and certificates marking the culmination of this phase of their education.

Citations and speeches from the weekend’s events are available to read.

A charge and responsibility to lead change

Huerta has dedicated her life to advocating for justice for women, for people of color, for laborers and immigrants.

Citing the Spanish philosopher José Ortega y Gasset, Huerta reminded students that they have the power — and privilege — necessary to make change in the world.

A welcome to “the most wonderful club on Earth”

Debra Martin Chase ’77, representing the Board of Trustees, convened the ceremony, welcoming the graduating class to the “most wonderful club on Earth,” that of Mount Holyoke alumnae.

“We are a fierce, dynamic and determined group who are each in our own way trying to make the world a better place,” she said. “We support each other and cherish each other.”

Chase, who has produced numerous television shows and movies as one of the few African American producers in Hollywood, is testament to the success that is possible with conviction and courage.

“With an open heart and open mind and perseverance, all things are possible,” she said.

Acting President Sonya Stephens delivered her charge to the class, which responded with enthusiastic cheers.

“Mount Holyoke was built on the principle that its students would, in its own motto, ‘live to do good,’ and that in the founder’s words, they would ‘take hold where no one else will,’” Stephens said. “This is our heritage, and this is the charge that comes with your diploma. You’ve made a difference at Mount Holyoke and you will make a difference in the world.”

“If Mount Holyoke has taught us anything, it’s how to push,” she said, noting several successful actions that Mount Holyoke students had participated in during her time as an undergraduate, agitating for change on a number of levels.

“We have transformed from students interested in a field to graduates with a mastery of making the world a better place,” she said. She ended her address with a Mexican saying, “Quisieron enterrarnos pero no sabían que éramos semillas,” which she translated as, “They tried to bury us. They didn’t know we were seeds.”

“It’s our time to flourish,” she said to the receptive cheers of her classmates.

The Mount Holyoke spirit in the world

Photographer and filmmaker Joan Biren ’66, who received an honorary doctorate in fine arts, exhorted the graduates to live authentic lives — and to “hold on to simple decency and resist.”

“You have an obligation to be a part of the struggle for social justice,” she told them. “It benefits you personally as well as lifting up less-advantaged people.”

But the most important thing of all, Biren reminded them, was to love.

Kathryn Finney, who was conferred an honorary doctorate in humane letters, echoed the theme of empowerment and courage. Finney is founder and managing director of Digitalundivided, a social enterprise that fosters economic growth by empowering black and Latina women entrepreneurs.

Describing her own experiences being bullied, Finney urged the College’s newest alumnae to embrace their power.

“I didn’t realize they were picking on me because I was powerful,” she said. “There is nothing more powerful — nothing — than a woman, especially a black woman, a woman of color, knowing and owning her personhood. I’m here to tell you that you do the world, you do yourself a disservice when you shrink, when you’re small. That you can’t even hide yourself even if you tried, so stop trying. And give them something to look at.”

Huerta also received an honorary doctorate in humane letters. She gave the class of 2017 a word to take them into the future to sustain their successes and soften their challenges:

Toward the end of her speech, Huerta invited the audience to participate in “vivas,” Spanish cheers meaning “long live.”

“Viva the graduating class of 2017!” roared the graduates, professors, and the hundreds of friends and family members who had gathered to watch the ceremony. “Viva Mount Holyoke! Viva the parents out there that helped all of us get here!”

Then Huerta asked, “Are we going to be able to do the work that we need to do? Are we going to create a just society, not only for the United States, but for all those other women in the world?”

Yes, you can. Learn more. 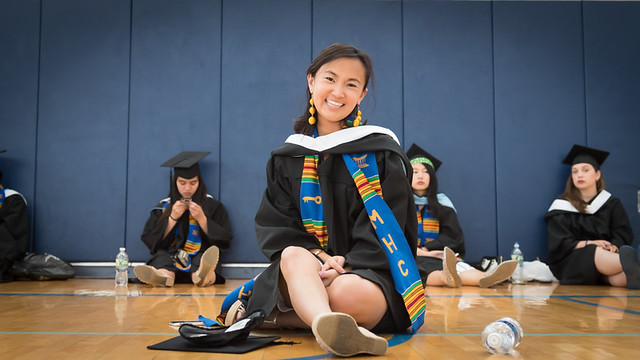