Please visit the COVID-19 page for updates on the status of the global outbreak and how the College is responding to its impact on our community. FAQs are being updated regularly.

International relations through a camera lens

Survivors of sexual violence and their families work in a sewing studio outside the city of Beni, eastern Democratic Republic of Congo.

Internationally renowned American photographer Pete Muller is the Cyrus Vance Professor of International Relations this semester. Muller explores the topics of violence, oppression, masculinity and culture in his photographs, which echo the colors and contrasts of classical paintings. This is no accident: his grandfather, Leon Kelly, was one of the pioneering  surrealist painters in the United States, and art is a family passion.

In class, Muller will put down the camera and take up the topics it reveals. Those big ideas are what shapes his work, Muller said.

“I'm interested in large questions,” he said. “Why do humans, namely men, become violent? What motivates the conflicts we see so ubiquitously in the world around us? I investigate these questions, in part, by employing photography in the fields of human ecology, gender studies and conflict analysis.”

Muller is currently based in Nairobi, Kenya. He began his career in 2005 covering Israel’s withdrawal from Gaza for a Palestinian news agency. Since then, he’s worked in northern Uganda, Somalia, Sudan, Afghanistan, Democratic Republic of Congo and other areas affected by sudden power shifts and cultural strife.

“I hope to impart to students that these issues are complicated and that it is important that we approach them with respect and deference,” he said. “It is important to know about a variety of fields, to think about the wide-ranging causes and implications of conflicts, injustices and violence.”

While he hopes to share the power of photography, which he called “an evocative, universal medium,” Muller stressed that it’s just a tool.

“The freshness and veracity of our ideas supersede the importance of the medium,” he said. “It doesn't matter if one is a writer, a researcher, a photographer or an investment banker. The ideas are paramount.”

Another facet that Muller will explore in the class: the humanity that can be  elided over in the field of international relations.

As a student at American University, he often felt that conflicts and atrocities were “somewhat distant and sterile” in his international relations classes.

“We'd discuss, for example, mass killing as a product of  ‘institutional weakness,’” he said. “Photography, at least the way that I practice it, is about people and the circumstances in which they find themselves. One of its intrinsic strengths is its ability to humanize the world around us.”

The Cyrus Vance Visiting Professorship in International Relations was established in 1987 to honor Cyrus R. Vance, secretary of state under Jimmy Carter and 1982 recipient of an honorary doctor of laws degree from Mount Holyoke. The professorship brings a prominent practitioner in international relations to Mount Holyoke for a semester or full year.

Muller is a contributing photographer to National Geographic,  Time magazine, The New York Times, The Washington Post and other leading photographic outlets. He has worked with international organizations including Amnesty International, Human Rights Watch, UNICEF, Nobel Women’s Initiative, Greenpeace and others.

See some of Muller's work here: 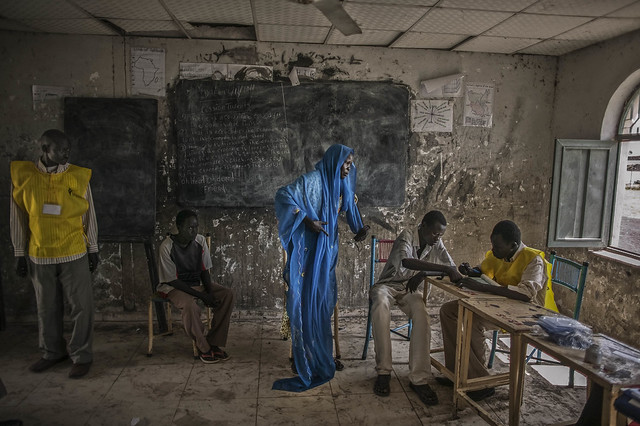