Visit the campus updates page for information on Mount Holyoke's response to the global pandemic. The Opening the Gates site contains details about the fall semester. 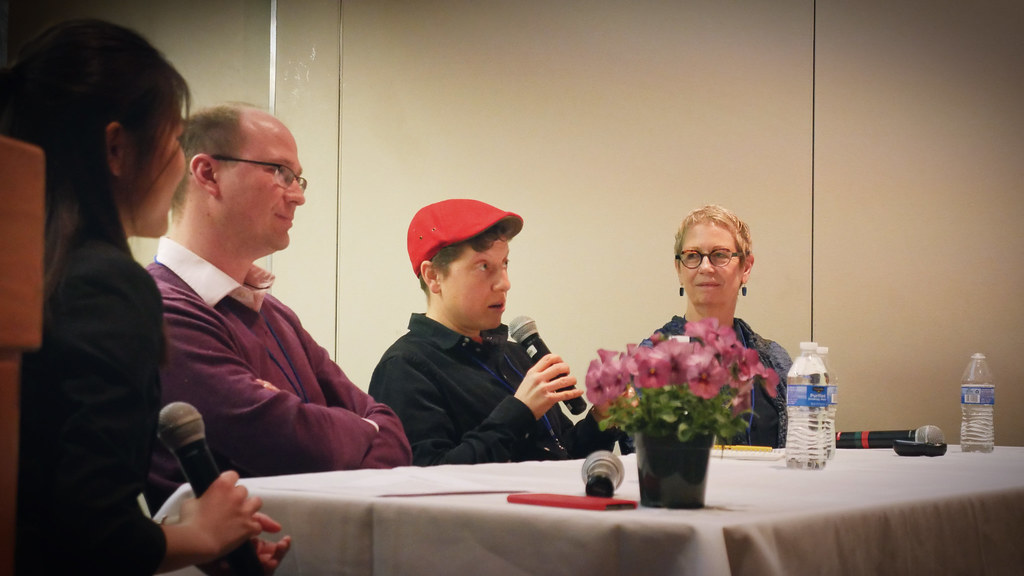 On Saturday, April 14th, professional artists, professors, and students revealed touching anecdotes and inspiring stories as speakers for the first annual Five College Art Conference (#FCAC2018) held at Mount Holyoke College. The brainchild of sophomore Yuchen “Angel” Xiang ’20, this conference allowed disparate groups of people to commune together and share their passion for art. We even had folks come down from Rhode Island! The showing was small, but that made the conversation more intimate and of course more donuts and coffee for everyone.

The conference was kicked off by MHC art history professor and departmental chair Ajay Sinha, who worked closely with the Art Society to make this conference possible. His genuine interest and pride in the success of such an ambitious event was evident in his opening remarks. His warm welcome established the easy feel of the day, which continued throughout the panel discussions.

The panels were centered around a theme much prevalent in today’s discussions and awareness: identity. The speakers hailed from a range of different “identities” coming from different parts of the globe, different social upbringings to differences in gender, race and sexuality. They were asked to discuss how these various “identities” interact with the arts in their lives. Each panel resulted in a fascinating discussion that had us all thinking.

Panel 1: “Identity in the Making of Art”

This panel included artist speakers: Samuel Ace, Eunjung Park, and Jacob Rhoads. Each representing a different approach to creation Ace a sound artist and poet, Park working in a variety of tactile materials, and Rhoads medium of choice oil paint or ink. They were asked if they felt their art being shaped by their identities or if it was a theme. Nearly all agreed that their art was not about their identities though understandably it is a major influence.

To answer, Rhoads went back his days as a student when he studied philosophy. He revealed that during his study he became interested in the theory that a person soaks up their environment, becoming prevalent in all their actions. For him, this showed through his gestural style which is highly improvisational. As he continued to create, he began to see the self as the object of study. He did not try to alter this subconscious instinct but instead began to take note of the results. This approach to identity as a tool of expression rather than the purpose was carried on throughout the panel.

Ace revealed that he felt a similar fluidity when he writes. We can all be glad he decided to not hinder his self-expression, for his astounding work is in the simplest of terms “real”. This realness carries in his writing all the strength of genuine emotions: pain, confusion, joy etc. Those at the conference were done the favor of having one of his poems read aloud to them. It provocatively began, “I met a man who was a woman who was a man”. It was a beautiful piece that is as dizzying as life, as convoluted as all of us, and as important now more than ever. As a transpoet, Ace found himself writing about the identity of self and body and influenced by its interactions with the world.

Park too focuses on bodily interaction and reaction in her work. She was adamant that work was also not “about” her gender or her South Korean origin. Instead, she says she wants the element of the “real”. While acknowledging an interest in how the female body is portrayed in genres of film, she would rather focus on the emotion than the obvious political connections. As a result, she finds herself using tactile materials that evoke different memories and associates in all of us.

It was an intriguing panel, fascinating for anyone listening regardless of their role in art. The great thing about this conference was that you did not have to be a creator to enjoy or understand the discussion.

These speakers, besides studio art professor Gina Siepel, are not involved with the creation aspect of the arts. Instead, they were asked how their interactions with museums and museum objects influenced their identities and vice versa.

An incredibly interesting conversation was sparked by Siepel, an artist who also teaches studio art here at Mount Holyoke. Siepel, whose first introduction to the arts was the hand-painted landscapes on the side of Uhauls, encountered museums in grad school. Within the museum space, she recognized a place for non-hierarchical dialogue, a place where disparate identities can speak together. She identified the various aspects as what you the viewer bring in, what the curator brings, the institution, and the materials themselves. Her discovery that this dialogue “trains our minds in a practice of cultivating a breadth of vision” was something the rest of the panel agreed upon.

Bettina Bergmann, Professor of Art History at Mount Holyoke, also acknowledges a type of dialogue between identities from her standpoint of ancient art history. She sees museums as a place where people today can come into contact with the people of millennia ago. When she takes her classes to the museum on campus she sees herself cultivating this experience. As the students hold ancient coins they are connected to the hundreds of other people who had once held those same coins.

Physics professor at Mount Holyoke, Spencer Smith, approaches this dialogue from a completely different angle. He scared all the humanities people in the auditorium when he flashed on the screen a slide titled, “Interesting Physics at the Intersection of Computational Fluid Dynamics, Chaos Theory, and Topology”. However, he put our minds at ease when he explained his interests lie in the science of how art is created and the aesthetics of science. It is from this point of view that he brings students into the museum to experience the dialogue between art and science. With his students, he led an exercise on reductionism and emergence while looking at the astounding Chuck Close self-portrait in our own museum’s collection. The students then saw the reduction of Close’s layers of abstract markings ultimately resulting in the emergence of a portrait (stem major please forgive me).

In the end, these speakers reaffirmed the museum’s place in all our lives as well as our place within the museum. They plead with students to not let the dialogues present in the museum bog them down. Siepel’s advice to students is to be an “empowered viewer” and talk back. To allow your own identity join the conversation and make the space your own.

This idea led to the final panel of student presentations were our very own Mount Holyoke peers shared their interactions with art and art spaces. Juliana Cordero ’18, Reyln Myrthil ’19, Mary Kate McTeigue ’18, and Jen Villa ’21 all presented their own stories.

Cordero and Myrthil shared their experiences with the Mount Holyoke College Museum. They shared stories of how working within that space allowed them to both expand and share their identities. Their experiences of how we as students can harness our passions and the opportunities given to us at Mount Holyoke was inspiring. Myrthil was able to compound her passion for music and art as she showed slides of her playing the violin within the galleries.

McTeigue and Villa showed us their art and how it relates to their identities.

McTeigue creates domestic three-dimensional objects like aprons or laundry baskets out of paper. She reveals that her work is a result of her role as a mother. Her works are haunting yet beautiful as their weightlessness is challenged by the heavy emotions felt when creating them.

Villa’s work often revolves around her identity as an environmentalist. Her works are hard but direct, working in a variety of mediums. One particularly jarring piece depicted the head of an elephant whose entire trunk had been cut off for the ivory that she laid around the poor animal.

The stories that came from all three panels were inspiring, the food was tasty, and the company amazing. Overall the first annual Five College Art Conference was a big success. And as co-chair of the Art Society Yunchen Xiang said in her closing remarks, it will just keep getting better and better. So if you missed out this year stay tuned for updates on next year’s conference. In the meantime check out the artists’ websites and some pictures from that Saturday!

Crafting a full life in the arts

Mount Holyoke’s event Crafting a Life in the Arts shows students that the COVID-19 pandemic shouldn’t deter a sustaining life in the arts.

A seminar that introduces students to art history through the Art Museum.

An overview of European and American art from the Renaissance to the present.

The Art History and Architectural Studies faculty planned a Senior Celebration for all graduating students on March 13, 2020.

Mount Holyoke Associate Professor of Art History Jessica Maier has received a fellowship from the National Endowment for the Humanities.

A new gift of ancient objects

A recent donation to Mount Holyoke has prompted a reenvisioning of gallery displays to be more global and provide context to the collection.