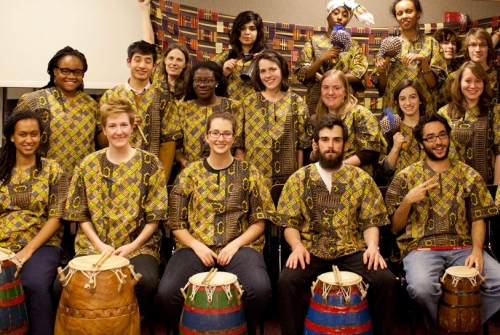 The mission of this Ensemble is to engage Five College students in playing music together, to engender interest, appreciation and respect for African music and musicians, and to educate audiences by creating performances in collaboration with African guest performers.

The Five College West African Music Ensemble is made up of students from two classes, MUS 161 and 261. We focus on music from the Gbe-speaking people of southern Togo, Ghana, and Benin (from which much Haitian traditional music is descended).  At the core of our repertoire are the dance-drumming pieces Gahu (a recreational piece originally from Nigeria), Agbekor (a music related to war) as taught by Nani Agbeli, and Adjogbo (a royal dance with chanted poems) as taught by Gadji Venance Folly. Diverse selections from these pieces, as well as selections from other pieces such as Agbadza, Adzrowo, and Kpanlogo, are chosen for study and performance according to member interest and ability. A dance component is essential to these art forms; members are required to participate in dance as well as play instruments and sing.

Ensemble members learn to play authentic instruments (such as drums, bells and shakers), sing and dance. Our end of semester concerts feature African guest artists. Participation in the ensemble has functioned as a starting point for deeper explorations of African music in the U.S. and abroad. Several ensemble students have traveled to continue their musical study in Ghana.

In addition to playing concert each semester, we are often invited to perform at events on campus and around the Five Colleges. Past performances have included Convocation, Africa Day, a museum performance honoring Ghanaian artist El Anatsui, No Study Zone, MHACASA events, Global Fest, and Pangy Day.

We have been fortunate enough to collaborate with many African guest artists since its inception over a decade ago. Artists have included Samuel Nyamuame, Nani and Emmanuel Agbeli, Saeed Abbas, Rebecca Korley, the Gnonlonfoun family from Benin (Jomion and the Uklos), and Kwabena Boateng. The guest artists’ support, teaching, and concert performances are an invaluable feature of the ensemble experience.

The ensemble is directed by Faith Conant.

There are no auditions for MUS161 and no previous musical experience is necessary.

Members of the ensemble often include those who have never studied an instrument, music majors and jazz players, all of whom share an interest in African music and culture and a wish to experience the joy of making music with others. No reading of musical notation is required. We learn pieces in class by ear through vugbe, “drum language”, which refers to the naming of specific sounds made on the drums in a kind of indigenous solfège. Readings, video screenings, and class visits by African artists inform discussion of the sociocultural context of the music and its performance.

MUS 161 is conceived as a year-long sequence (generally focusing on the pieces Gahu and Agbekor) and is the normal prerequisite for MUS 261 (Adjogbo). 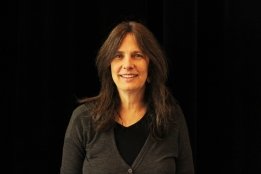