Well before she became deputy chief of staff for policy in the Obama Administration, Mona Sutphen ’89 found herself, at the start of her career, worrying about microphone placement.

Years later at an important event, those early event-planner skills came in handy.

The point, said Sutphen, addressing Mount Holyoke College students, is that “the first 10 years of your career are really about skills acquisition. Go out and get the skills and don’t worry about where it leads.”

As she learned from her colleague, former U.S. National Security Advisor Sandy Berger, “The hardest part of your career is figuring out what you want." 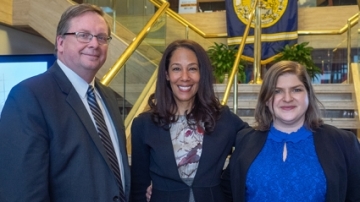 Sutphen was speaking in March as the keynote speaker at the College’s annual Careers in Public Service program, which is sponsored by the Weissman Center for Leadership. The competitive program brings students who are interested in public service to Washington, D.C., to meet and hear from inspiring alumnae who work locally and across the globe in the fields of politics, policy, advocacy and government.

“Now more than ever, we need Mount Holyoke students in public service,” said Amy Martin, director of the Weissman Center and professor of English on the Emma B. Kennedy Foundation. “Just to have these 40 extraordinary students here — and 10 of our illustrious alumnae — is so exciting.”

How are Mount Holyoke alums helpful?

The day-long conference included panel discussions, networking sessions and the opportunity for students to shape — or reshape — their attitudes, assumptions and aspirations. The 10 alums, ranging from the class of 1973 to 2016, offered direct lessons about their professional journeys after leaving the South Hadley campus. 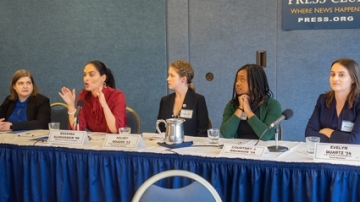 In addition to specific information about their fields, their experiences showed that a career is not always linear and that moving forward requires persistence, perseverance and an ongoing openness to learning.

Receiving such insight — and access — as an undergraduate has powerful effects. “I don’t have the words for the impact it has on the students,” Martin said. The students enthusiastically agreed.

“One of the most rewarding parts of being here is the connections I’m making with alumnae and the advice I’m getting from them,” said Sarah Bloomgarden ’20, a politics major. “I’m more open to exploring other career choices now. One of the concerns I had was that I wasn’t sure I had the skillset to do other things. But I’ve learned I have the ability to grow and learn skills.” 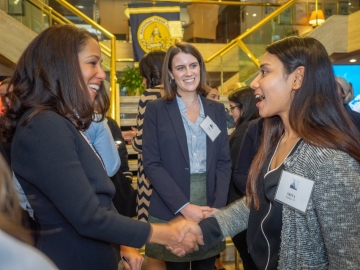 Before her Washington experience, Bloomgarden, who is interning at The Brady Center for the Prevention of Gun Violence this spring, had planned to work in academia. Now she’s considering work in advocacy or at a think tank, or possibly running for elected office.

Most of the 40 students — the seven-year-old program’s largest cohort ever — made the 350-mile bus trip from campus. Bloomgarden and four other students were already in the nation’s capital, as participants in the Weissman Center’s newest offering, MHC Semester in D.C. The semester-long study program offers internships, networking opportunities and mentoring from alumnae working in the city. 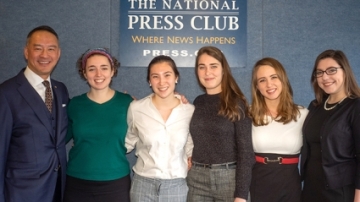 These five students are the second cohort of the program, which kicked off in the fall of 2018 and is directed by Calvin Chen, associate professor of politics.

The Mount Holyoke network is deep and broad

Two common threads consistently emerged throughout the day. Evelyn Quartz ’14, press secretary for the House Committee on Small Business, summed up the first: “We need more women on Capitol Hill.”

The 40 students were eager to meet that challenge.

They will be in a stronger position to do so, if they choose, because of the second thread: the strong and lifelong bond among Mount Holyoke graduates. That was clear to the students, for whom having the opportunity to connect with Washington-based alumnae was an empowering start to a future of networking and shared accomplishments.

Nada Al-Thawr ’19, a computer science and international relations double major from Yemen, said one of the big draws of the Careers in Public Service program was the chance to network. 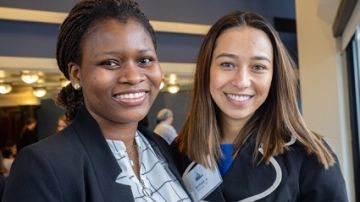 “I really wanted to meet alumnae who are here working in their fields,” said Al-Thawr, noting that she has accepted a job in software engineering at Macedon Technologies in Reston, Virginia, after she graduates. “It’s been incredible. I’m so inspired. I’ve laughed and cried.”

Courtney Brunson ’16, an investigator in the office of Senator Elizabeth Warren who will attend Harvard Law School in the fall, found significance in the women with this shared heritage.

“Mount Holyoke is one of the best networks you can have,” she said. “There are so many alums that have been in the game for decades.”

As one of those women, Anne Dix ’91 gave the credit to the College.