A shining kick-off to the new year

Convocation marks the official beginning of the 2019–2020 academic year for 2,199 Mount Holyoke students, including 507 incoming first-years.

Classes flocked together, all dressed, painted and spangled in the brilliant colors of their class symbols. Seniors, the blue lions, were in head-to-toe cobalt, including a group holding a giant pair of glasses symbolizing their “2020” vision. Sophomores turned out in the scarlet hues of the red pegasi. Juniors, the griffins, were in shades of brilliant jade. 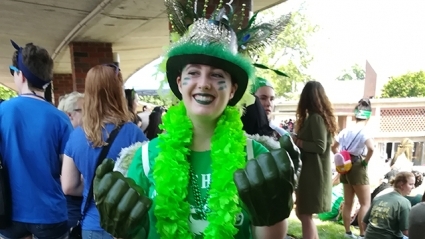 One junior, Grace Alexander, was decked out in top-to-toe green, the color of the class symbol of griffin, with a lei, hand-made angel wings and a top hat bedazzled with shining feathers and Mardi Gras beads. She and her mother had made the ensemble together out of found materials.“We wanted to make something festive,” Alexander said.

As each class filed in to take their seats to fill Richard Glenn Gettell Amphitheater to near-capacity, they were accompanied by the rhythmic drumming of the Five College West African Music Ensemble. Loud cheers buoyed them along as they were announced, with spontaneous rounds of “H-O-L-Y … O-K-E!” When the seniors took their spots, the crowd cheered for them, shouting, “2020, 2020!” 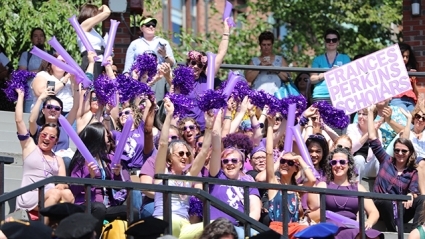 Amid the celebratory fervor, Carrie Field ’97, a member of the College’s Board of Trustees, took the podium to convene the ceremony and welcome each class in succession. When she called on the purple-bedecked Frances Perkins scholars, the thunderous cheers and whoops roared to a crescendo.

When the shouts and clapping died down, Field noted that when she was a student at Mount Holyoke, one of her chief concerns was making sure the phone in her residence hall was working. She also said that she received her first-ever email at Mount Holyoke. And then she offered new and returning students sage advice: take the time to unplug and live the moment that you are in — stay grounded where you are and enjoy the experience. 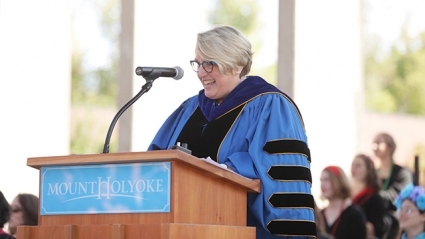 After Field’s speech, President Sonya Stephens welcomed each class and announced the creation of a new class color and symbol for graduate students: the teal owls — teal because it is the color of optimism and the owl because it is the symbol of knowledge and wisdom.

Stephens went on to exhort students to find their affinity groups, those with whom they share deep similarities, but not to shy from exploring differences. Engaging in discussions across differences in a thoughtful, loving way is critical now, she said, in this time where public discourse is more divisive and vitriolic than ever.

“In paying careful attention to someone else’s ideas, in bringing rigor to our listening as well as to our work, and in empowering each other to speak, we can bring change to our experience here,” she said. “We owe it to ourselves, to each other, to this community and to the world, to do this.” 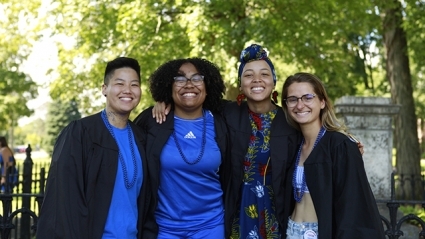 Suparna Roychoudhury, associate professor of English, was next to speak. She reminded the crowd that time is not a linear and fixed concept, but an elastic idea, anchoring us to different identities and contexts. What might be a “first” for some might be a “last” for others. Wherever one is within time, she said, it is something that must be savored.

“Undergraduate time is not so easily categorized. The first time, the last time, the never-before and the always-already are all stitched up in every single moment,” she said. “It is always the beginning and the end and the middle. ... We are Mount Holyoke. We carry the time!” 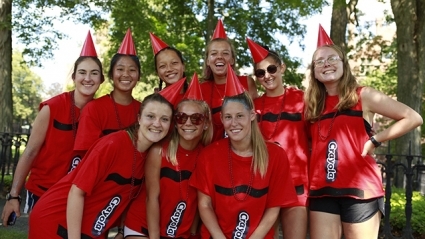 After a shimmy-enhanced rendition of the “Alma Mater,” students fanned out to enjoy the Convocation picnic on Skinner Green.

Senior Deanna Kalian, a double-major in English and ancient studies, had a nugget of wisdom for incoming students who will face academic challenges as the year progresses and the celebratory experience of Convocation gives way to the rigors of academic excellence.

“Don’t be afraid to reach out to your professors for help,” she said to a chorus of agreement from the group of seniors around her. “They can be like your parents and give you support and guidance too.” 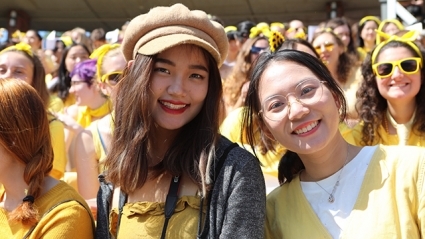 Elba Barra Montgomery ’23, grew up in Tanzania before moving to North Carolina a year ago and wants to go into the medical profession. She said she was thrilled by Convocation.

“I’ve never seen anything like that,” she said. The excitement of the upper classes was contagious. “The first year students were a bit confused, but you could tell that the other classes were so excited. This school has a really great vibe!”