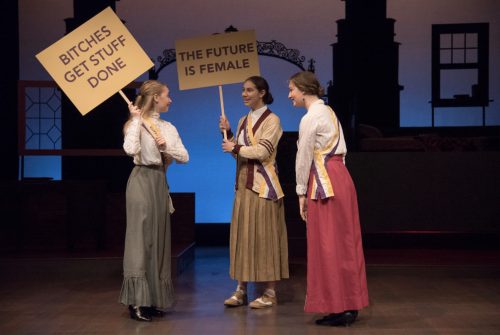 Performances are in the Rooke Theatre on the Mount Holyoke College campus, at the corner of Morgan Street and Lower Lake Road in South Hadley MA.

We are committed to collaborating with BIPOC students, and all interested members of the larger community, in every aspect of our production season from casting through to the final product, to shape a department that is relevant, vibrant, inclusive, and firmly antiracist.

The Sweet Science of Bruising

We begin the season with Joy Wilkinson’s The Sweet Science of Bruising, a rambunctious new play about the underground world of Victorian female boxing. Four very different women are drawn from different walks of 19th century London and into the boxing ring where their lives are intertwined through bouts of passion and a quest for freedom. In the end, only one can become world champion.

“Wilkinson’s storytelling has an attractive briskness and clarity, which builds up engrossing details about female boxing…. Each of the four main protagonists seeks the power to have some control over their lives, and this remains a radical goal today”
-The Theater Times.

Resplendent with the pugilistic arts, who else should direct this but our own stage combat expert, Assistant Professor Noah Tuleja. Sweet Science runs from October 20-23, 2022.

We round up the fall semester with Miguel Pinero’s award-winning Short Eyes. Written during Pinero’s incarceration in the 1970s, this gripping drama deals with the complexities of daily life in a New York State Penitentiary punctuated by an ever-looming threat of violence and shifting alliances. When a man accused of molesting a child is brought into the prison, what ensues is a search for morality and justice in an unassuming place.

The show runs from November 17-20, 2022 and is directed by Visiting Lecturer and Director of Production, Michael Ofori.

Ike Holter’s Exit Strategy begins the spring semester. At once funny, angry, warm and sad, this timely and poignant drama deals with an inner city public school on the brink of extinction. The fictional Chicago based Tumbldn High School is severely underfunded and undermined. The impending closure thrusts its vice principal, teachers and a student into a battle to save their beloved institution. Will the bonds forged in this battle be enough to rescue their school from extinction?

“...Holter's beautifully written piece crackles with energy and passion - it hearkens back to those early British plays by Harold Brenton and David Hare in the way it combines issues and politics with emotion and personality.”
-Stage Raw.

Exit Strategy runs from March 2-5, 2023. A guest director for the show will be announced at a later date.

The second show in the spring is Jen Silverman’s dark comedy, The Moors. Two sisters, Agatha and Huldey live on the bleak and savage English moors. The arrival of a governess in search of their mysteriously absent brother Mr. Branwell sets the household on a path of confusion, jealousy, betrayal, a quest for love, and a quest to be seen.

“However you classify “The Moors” — comedy, drama, thriller satire, farce all apply at various times — there’s no equivocating on its entertainment value.”
-Chicago Suntimes.

The Moors is directed by FMT graduating senior Nicole Tripp and will run from March 30-April 2, 2023.

We end the academic year with the second annual Mount Holyoke College Film Festival. The festival will feature films made from courses in narrative and documentary filmmaking, acting and design. At the helm of the festival is Assistant Professor, Elliot Montague. The festival will happen on April 30, 2023.

This season we will focus on stories by and about BIPOC individuals.

December 3–5: The first annual Student Theater Festival promises to be an exciting weekend of work devised, directed, designed and produced by our own students. Please join us to celebrate the creative energies of MHC's budding theatre artists.

March 3–6: A modem imagining of a hero's journey: Red Rainbow by up-and-coming playwright Azure D. Osborne-Lee, to be directed by Zoe Fieldman '22.

April 22–24: FMT and MHC's first Student Film Festival – a chance for us all to enjoy the culmination of a year's work in film and media, drawn from our courses in documentary and narrative filmmaking, acting and design.

We used a hybrid model for our productions that enabled us to produce an exciting season within the confines of the COVID-19 pandemic.

The season began with a radio-play version of William Shakespeare's delightful screwball comedy Much Ado About Nothing. The entire play was rehearsed and recorded during the second Module of the fall term. The production was directed by Noah Tuleja, Assistant Professor and Director of Theatre.

The spring term opened with Naomi Iizuka's eerie Language of Angels, with Visiting Lecturer Michael Ofori at the helm. This will be a video production.

The final performance of the season was Sophie Treadwell's Expressionist masterpiece, Machinal as a video performance, directed by Gracie Donelly-Fisher '21.

“Pride and Prejudice” by Kate Hamill, directed by Katy Gore ‘19
October 18-20
The classic tale of terrible first impressions, powerful social hierarchies, and the games people play all in the name of love--and money.

“She Kills Monsters” by Qui Nguyen, directed by Noah Tuleja
November 21-24
After Tilly dies unexpectedly, her older sister, Agnes, finds her “Dungeon & Dragons” notebook ...and so begins a journey through grief like nothing you have ever seen, complete with fairies, orcs, sword fights and dragons.

“Lizzie, the musical” by Steven Cheslik-DeMeyer, Alan Stevens Hewitt and Tim Maner, directed by Michael Ofori
March 5-8
This raucous four-woman rock opera delves into the Lizzie Borden myth and has been hailed by critics both here and abroad.

CANCELLED: “The Wonder: A Woman Keeps a Secret” a comedy by Susanna Centlivre, directed by Sophia Kitch-Peck ‘20
April 23-26
Faced with an unwanted marriage Isabella does the sensible thing--she jumps out of her window and escapes.  This clever critique of tyrannical patriarchy by one of England’s earliest professional female playwrights proved to be one of the most popular works of the eighteenth-century English stage.

“Trifles” by Susan Glaspell, directed by Brianna Sloane
October 18-21, 2018
An important early feminist drama from 1916, the play explores the divide between men and women and poses the questions "What is justice?" and "Who gets to judge?"

“The House of Bernarda Alba” by Federico Garcia Lorca, adapted by Emily Mann, directed by Miranda Wheeler '19
December 6-9, 2018
After her husband's death, iron-fisted Bernarda imposes an eight-year mourning period on her daughters, trapping them in a claustrophobic house teeming with jealousy and repressed desire under the burning Spanish sun.

“The Importance of Being Earnest” by Oscar Wilde, directed by Noah Tuleja
February 21-23, 2019
Considered one of the greatest comedies of the English-language stage, this play of false identities and fiction vs. truth is a delight for all audiences.

“When We Were Young and Unafraid” by Sarah Treem, directed by Abby Carroll '19
April 11-14, 2019
Treem "finds the feminist flux and foment in an era that has been more traditionally presented as comically awkward and quaint. She has come up with a smart and exciting premise to bring characters of different backgrounds-and different notions of what it means to be a women at a pivotal historical moment-into proximity and conflict." — New York Times

Slideshows from previous performances can be found in the Mount Holyoke College Theater Flickr albums.

The Department of Film Media Theater oversees an innovative, project-based curriculum that integrates practices of critical study with production and performance in the fields of film, media and theater.