A leading authority on women and sports, Laurie Priest is active professionally on national, regional and state levels, has published numerous articles, and is a frequent presenter at conferences. She is a tireless advocate for equity in sport and is recognized nationally for her work to promote and support Title IX. In l989-90, Priest was elected president of the National Association for Girls and Women in Sport. She served on the NCAA women's committee on committees from 1991-94, and chaired this committee in 1993-94. Priest also served from 1993-96 on the executive council of the Eastern College Athletic Conference and from 1996-2000 on the executive board of the National Association of Collegiate Women Athletic Administrators (NACWAA). In 1999-2002, Priest served on the board of governors and currently serves as the chair of the Social Justice Committee for the American Alliance for Health, Physical Education, Recreation and Dance.

In l991, Priest was awarded the Mabel Lee Award from the American Alliance for Health, Physical Education, Recreation and Dance and in 1992 was inducted into the Northeast New Agenda Hall of Fame. In 1997, she received the Massachusetts Association for Intercollegiate Athletics for Women Merit Award for outstanding leadership in women's athletics. In 2002 she was recognized by the National Association for Girls and Women in Sport as their Honor Award recipient and as the Division III Athletic Administrator of the Year by the National Association for Collegiate Women Athletic Administrators. In May 2007, she was inducted into the Marymount University Athletic Hall of Fame and in the fall of that same year selected as one of the 100 Most Influential Sports Educators in America by the Institute for International Sport. She was awarded a $40,000 grant from the National Collegiate Athletic Association to support a graduate internship for women and ethnic minorities interested in athletic administration.

Priest received her B.S. in physical education in 1977 from the College of Wooster (Ohio), and her M.S. in exercise physiology from the University of Maryland-College Park. Prior to coming to Mount Holyoke in l989, she served for seven years as director of athletics, assistant professor and swimming coach at Marymount University in Arlington, Virginia.

Women in sport; Title IX and gender equity issues; health and fitness benefits of exercise and sport for women; addressing homophobia in athletics 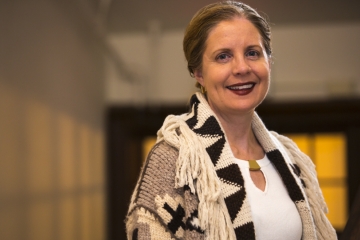 Athletics gets it done

Teaching leadership and fitness to student-athletes and all students is a core part of Lori Hendricks’ goals, says the athletics director at Mount Holyoke.