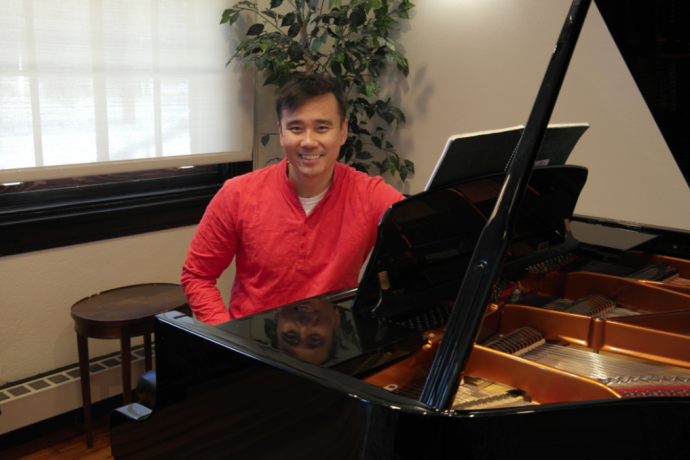 His innovative programming has been acknowledged with grants from institutions such as the Massachusetts Cultural Council, National Arts Council of Singapore, Singapore International Foundation, Women’s Philharmonic, and WomenArts, in addition to other awards from the Oregon Bach Festival, the Dartington International Music Festival, the Yale School of Music, and the Singapore Government Public Service Commission.

An advocate of new music, he has assisted in and premiered new works by Pulitzer and Rome Prize winners such as Curt Cacioppo, Aaron Jay Kernis, Robert Kyr, David Sanford, and Joan Tower, and many young composers. He is particularly proud of his commissioning work, which has helped composers like Chen Zhangyi garner international prizes such as the London Symphony Orchestra Prize. His 2001 direction of Stravinsky’s The Rake’s Progress was praised by the Birmingham Post (UK) for its “high orchestral quality” while his 2014 premiere of Mary D. Watkins’s Civil Rights era opera, Dark River, was critically acclaimed in the United States.

Tian’s irrepressible musical spirit first expressed itself when he conducted a choir of kindergarten children in his native Singapore at the age of five. A pianist, singer, and trombonist, he later studied composition and early music at the University of Birmingham (UK) where he discovered his love for Stravinsky and contemporary music.

Returning home, he helped found one of the first contemporary music ensembles in the country and was soon composing for animation, dance, film, chorus, and orchestra. It was during this time that he discovered his affinity for interdisciplinary work and created the groundbreaking site-specific community-based arts festival, NOMAD, with which he has won awards from the Singapore National Arts Council. His works have since been heard in diverse settings such as the Hong Kong Film Festival, Animation World Magazine (USA), and Apsara Asia Dance (Singapore).

Tian continued his education at the Yale School of Music (USA) where he helped to start a new tradition with the music of his graduation recital reflecting on war and conflict. There, he fed his passion for the masterworks of the choral orchestral repertoire, assisting such renowned interpreters as Nicholas McGegan, Masaaki Suzuki, Dale Warland, Simon Carrington, Marguerite Brooks and Jeffrey Douma. His recent studies have included work with Paolo Arrivabeni, John Carewe, Peter Eötvös, Kurt Masur, and Michel Tabachnik. 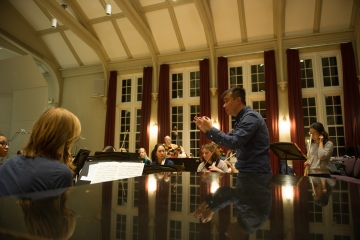 Members of the Mount Holyoke faculty are playing a key role in the Pioneer Valley Symphony’s new look at women composers. 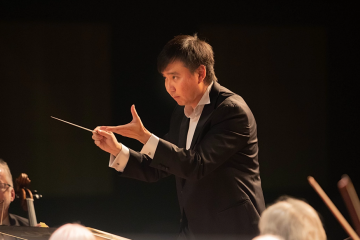 Using new music to tip the scales for justice

For Mount Holyoke music professor Tianhui Ng, conducting the Pioneer Valley Symphony is a chance to work with community members from all over the region.

Native American and Indigenous Studies Mellon Award by Five Colleges, Incorporated (FCI) and the Gathering at the Crossroads project, for a residency project with Native composer Jerod Impichchaachaaha’ Tate leading to the creation of a new course and the first ever full-length Chickasaw opera, Shellshaker. The project is for one year. This funding is made possible thanks to support from The Andrew W. Mellon Foundation.

Concluded a pandemic trilogy of virtual operas with "A Survivor's Odyssey", staged in UnReal and performed live on the newly developed TuttiRemote platform on September 21, 2021 with White Snake Projects. Focused on the social issues brought to the fore by the pandemic, this latest installment worked with multiple Boston community organizations to highlight the rise of intimate partner violence.

Was invited as a guest artist with the Lviv National Philharmonic of the Ukraine for a festival of music by the newly rediscovered composer, Thomas de Hartmann on September 17, 2021. The concert represented the culmination of a four-year long consultancy editing and performing the orchestral works of this contemporary of Rachmaninoff. Stravinsky and Kandinsky.

Released 10 new podcasts in partnership with WGBH in Boston and New England Public Media between October 12, and November 15, 2021, featuring performances of 10 new commissions with composer interviews.