The experience of international student Minnal Abbasi ’16 led her three sisters to Mount Holyoke's gates —and unexpected growth for the entire family.

When Minnal Abbasi ’16 took her first international flight — to attend Mount Holyoke College — it did not go well. Extended turbulence, a late arrival and lost luggage is enough to exhaust even the most experienced world traveler, much less an 18-year-old student in an unfamiliar country 6,000 miles from home.

Yet it was Abbasi’s desire to step beyond the familiar, beyond the emotional and cultural comfort of her native Pakistan, that led her to apply to Mount Holyoke.

“I craved the experience of living and studying in a completely different world, like the U.S., which is in many ways the polar opposite of Pakistan,” said Abbasi. “My parents were a bit apprehensive about sending their daughter to live in such a different culture, but I wanted an international education and they were very supportive.”

Little did she or her family know that the academic and personal growth she would experience, and especially the welcoming sense of community she found during her four years on campus, would set the stage for all three of her sisters to attend Mount Holyoke — leaving an indelible mark on the Abbasi family as a whole. 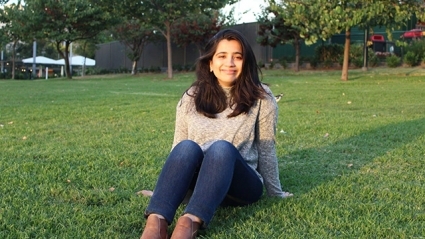 What’s it like living in a ‘totally foreign country’ as a new college student?

Leaving home for the first time often forces students to grapple with the demands of newfound independence. But for international students like Abbasi, navigating the unfamiliar mores and expectations of a different culture adds another layer of complexity to basic tasks like opening a checking account or finding the nearest Target.

“It was the first time I had to fend for myself,” said Abbasi. “The culture shock of doing that in a totally foreign country was real, and it was scary. But I emerged better equipped to adapt, travel and learn.”

International students first arrived at Mount Holyoke College in 1839. Today they make up roughly 30 percent of the student population and represent nearly 70 countries. Mount Holyoke’s extraordinary learning environment benefits students by creating spaces and opportunities for them to speak freely and to express their opinions, said Eva Paus, the Carol Hoffmann Collins director of the McCulloch Center for Global Initiatives. Likewise, a global education benefits everyone too.

“When students from different countries interact over time — in the classroom, in residence halls and within the greater college community — it challenges them to open their minds,” said Paus, who is also a professor of economics. “They learn not only to understand and empathize with people who differ from them; they learn to communicate across those differences.”

It was in this environment, in a community that strives to foster respect, tolerance and the value of engaging in difficult conversations, that Abbasi found her stride. Something as simple as sharing a meal and a conversation with someone from another country became a powerful two-way opportunity to dispel preconceived notions about their respective cultures.

“If I made an uninformed assumption, the person would correct me. And sometimes I was the one doing the correcting,” said Abbasi. “We learned by asking questions and having interesting conversations, which allowed us to build relationships across cultural divides.”

As a Muslim, Abbasi appreciated being able to practice her traditions, such as Jumma, the Friday prayer. The College holds a weekly Jumma lunch, where people of all faiths are welcome to eat delicious halal food, engage in discussion and pray together.

“Having something familiar from home here on campus made me more comfortable,” Abbasi said. “It’s not just Mount Holyoke’s education that’s special, it’s the diverse community, and the way it accepts and celebrates different cultures and ideas.”

During her trips back to Pakistan, Abbasi’s family witnessed growing confidence in their previously reserved daughter. Her experience navigating challenging conversations came in handy when, in her junior year, she decided to follow her passion by adding a biology minor to her computer science major, despite her parents’ concern about the lack of research opportunities at home. 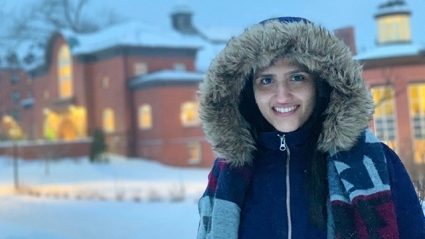 “Mount Holyoke helped me come out of my shell, find my voice and become my own person,” said Abbasi. “And I’m grateful that my parents were willing to have deep conversations and support me through that process.”

It was her new self-assurance, along with stories of an accepting campus community, that won her parents’ hearts and captured her sisters’ imaginations.

Why look anywhere else?

While Abbasi initially applied to 10 colleges, the decision about which college to attend was never in doubt for her twin sisters, Eeman Abbasi ’19 and Ammal Abbasi ’19. Although their parents encouraged them to apply to other institutions, they both chose to apply to Mount Holyoke early decision.

“I saw the effect Mount Holyoke had on my sister,” said Ammal. “Once timid and reserved, she carried herself with confidence, she believed in herself and her skills. I’m a relatively reserved person, and that change in my sister really drew me.”

It's not uncommon for siblings to attend Mount Holyoke, but as Minnal and her twin sisters — who are both double majors in computer science and biology — discovered, their overlapping year on campus yielded unexpected challenges and benefits. Watching her two previously distinct worlds suddenly collide felt surreal and launched Minnal back into a role no doubt familiar to many older siblings, that of advisor and solver of all problems, great and small.

“At first, they would come to me for every little thing,” said Minnal, laughing. “At one point, I even tried hiding in my room, but they always seemed to find me.”

She ultimately struck a balance between helping her sisters acclimate and pushing them to become independent. She introduced them to friends and cooked halal meals for them, but when it came down to things like opening a bank account, they were on their own.

Word of this balancing act traveled back to Pakistan, where their parents felt that their oldest daughter should help her younger sisters.

“I said, of course I will help them,” Minnal said. “But if they want to develop confidence and learn to be independent, then sometimes they have to do things on their own.” 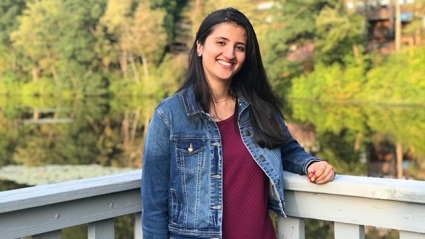 What happens when coursework collides with culture?

At the same time, the elder sister’s college experience proved advantageous in bridging academic and cultural issues. When both Eeman and Ammal chose biology as one of their two majors, their parents readily accepted the decision, thanks to their sister.

A more complicated conflict arose when Eeman was one of just a few undergraduates accepted to attend a doctoral consortium on computational sustainability at Cornell University. Her upbringing meant obtaining her parents’ permission to make the five-hour journey by car with three male graduate students — a prospect her parents felt strayed too far from their values.

“I was thrilled to be accepted to the conference,” said Eeman. “Even though my parents trust me absolutely, simply being a woman became a cultural obstacle.”

Her big sister took up the cause and called their parents to intervene. Minnal’s reassurance, combined with their trust, eventually led them to give the twin permission to attend the conference. 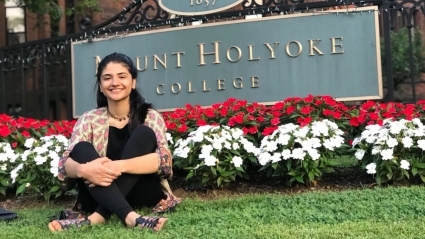 How is Mount Holyoke different?

Tales of life at Mount Holyoke became so woven into the family fabric that the youngest sister, Ahlaam Abbasi ’22, did not hesitate to apply early decision. Moreover, her experiences thus far match her expectations, as created by the stories her sisters shared.

“When my high school teachers asked questions, I’d rehearsed the answers in my head until I felt they were perfect,” said Ahlaam. “At Mount Holyoke, whether in a classroom or elsewhere on campus, I don’t need to have all the answers before I speak up, which is a wonderful way to learn and grow.”

As international students, the Abbasi sisters credit the College’s diverse community as an essential part of their Mount Holyoke experience. Creating that environment, noted Paus, requires a layered, multifaceted approach. This includes a range of practical support, from holding visa workshops to offering meals that reflect religious and other food preferences, and ensuring that resident advisors are familiar with the diverse cultures that students may bring to their residential halls.

“The totality of these different types of services and interactions — in addition to what happens in the classroom — provides a critical support system to ensure the students’ well-being,” said Paus.

Sharing the Mount Holyoke experience with their siblings in an environment that strives to acknowledge all people as individuals also allowed the Abbasi sisters to see each other in a new light.

“Our Mount Holyoke education has expanded the way we think and how we view the world,” said Eeman. “It has not only brought us closer as sisters, it’s allowed us to see and appreciate each other as smart, independent women.”

Just as the Abbasi sisters have grown and changed gradually over time, so too have their parents. Minnal noted that while her parents always prioritized education, conversations that questioned inherent aspects of their culture were a bit difficult for her parents at first.

“It took courage — for all of us — to break out of the traditional mold,” she said. “Our experiences at Mount Holyoke have helped us grow as individuals and as a family.”

Looking beyond the College gates

Currently, Minnal is at the University of Melbourne working on a master’s degree in bioinformatics — a discipline that sits at the intersection of computer science, biology and statistics. The twins are applying to graduate school and plan to pursue doctorates — Ammal in computational biology and Eeman in the emerging field of computational ecology and eco-informatics. A first-year student, Ahlaam has yet to declare a major, but she’s interested in combining computer science and environmental studies.

What began as a solo journey to experience an international education morphed into a shared family experience that opened minds and doors to opportunities beyond borders and cultural expectations.

“Mount Holyoke has given me and my sisters the opportunity and the platform to explore ourselves, discover our dreams and do great things,” said Ammal. “We’re well prepared for whatever comes next, and our parents could not be prouder.”

Discover your dreams. Schedule a tour.