Using modern technology to explore the past

It’s not enough for architectural studies students at Mount Holyoke to study historical designs. Program Chair Michael Davis believes that to truly grasp the evolution of architecture, it must be re-experienced, just as those who practiced the art in their time did.

That was the impetus for Davis’ class, Technologies of Architectural Design, part of the Arts and Technology Initiative.

The initiative seeks to transform teaching and learning across the arts curriculum — music, theater, art, film, architecture, dance — and with other disciplines to prepare students for a rapidly changing, globally connected 21st-century world. In particular, the initiative seeks to elevate and sustain a powerful maker culture for interdisciplinary learning and innovation.

“I believe that for students to really grasp the contemporary technologies and tools we have, they must have an appreciation of how those things evolved,” Davis said. “What did the ancient or medieval architect need to know? What difficulties did they face and how did the tools they used influence the practice of their craft?”

When the seminar’s 10 students laid out the plans of a medieval church on Skinner Green using stakes and string, they were investigating precisely that: re-constructing the challenges that architects might have faced. When they attempted to measure the height of the College’s Abbey Memorial Chapel, they used a reproduction of a 13th-century tool — Davis made it himself — a simple triangle of wood and string through which the viewer can estimate distances using one of the most elemental rules of geometry, the law of similar triangles.

“Our first shot at it we were really way off,” said Davis, describing their attempts to measure the height of the chapel walls (about 35 feet). The class also read texts from ancient Rome, the Middle Ages, and the Renaissance to gain a deeper sense of the architectural landscape and practice as it existed at the time.

In the second part of the course, Davis then took his students on a kind of architectural design safari, exploring the tools and techniques used by contemporary architects and scholars to study historical buildings, including virtual reality; open-source digital design software, such as SketchUp; and photogrammetry, wherein objects are photographed in three dimensions, and the images are combined in such a way as to make a manipulable, measurable 3D image. 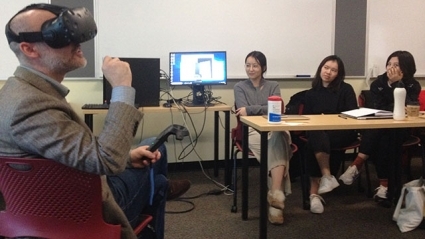 A highlight of the semester was the lecture and class by Nicola Camerlenghi of Dartmouth College, who spoke on “From Bricks to Bytes: Making the Virtual Basilica of St. Paul in Rome.” Thanks to assistance from Eitan Mendelowitz, visiting professor of data science, and Luke Jaeger, technical project administrator in computer science, viewers wearing virtual reality goggles could experience the 3D space of a 4th-century church. (See photo.)

“They brought big muscular computers that could run these complex programs, so we were able to have three people in the church at the same time,” said Davis.

With help from collaborator Nick Baker, formerly of Mount Holyoke’s Library, Information, and Technology Services, Davis has been able to digitally reconstruct a demolished 13th-century Franciscan church in Paris, from drawings, prints and paintings. His students continued the project by rebuilding the convent’s cloister.

“Drawing or digital reconstruction forces you to become a builder yourself,” said Davis. “You have to think through in a rigorous and detailed way how a building is put together. I think it awakens an appreciation of the mental agility of premodern builders and craftsmen who were able to think in two and three dimensions simultaneously.”

One of the challenges of examining lost historical buildings is managing missing pieces. Contemporary reconstructions of ancient buildings contain within them a great deal of guesswork.

“One of the things you come up against in any historical reconstruction is gaps in the record,” said Davis. “You might not know how the interior of the building looked, how it was furnished, where the staircases were — or you might have conflicts between verbal and visual records or different representations of the same detail.”

The critical thinking skills for filling in such gaps, or untangling an unclear record, will benefit any student, regardless of their future direction, said Davis, whose students included film studies, art history and theater arts majors, as well as architectural students.

“It’s a transferable skill to any area of activity where you have to judge and evaluate evidence,” said Davis.

Construct your future. Is a women’s college right for you?