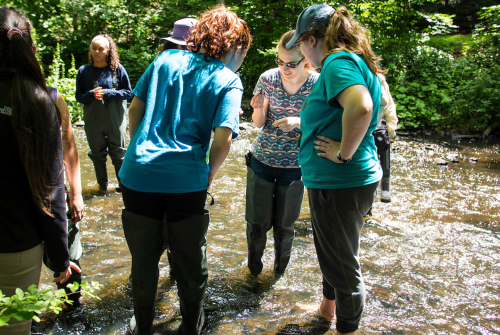 Inspired by a diversity of ecosystems and a culture of sustainability, the living laboratory transforms Mount Holyoke’s natural and built landscape into an exciting destination for hands-on, multidisciplinary undergraduate research and teaching.

The campus living lab allows students to advance discipline-specific and interdisciplinary learning to foster new ways of perceiving both the natural and built campus landscape. The living lab seeks to highlight and coordinate place-based opportunities for learning, experimentation, and demonstration through the integration of resources like campus ecological sites, progressive sustainable infrastructure, academic courses, and the botanic garden.

Hover over the icons on the image or see the descriptions below to learn the how the campus is used as a living laboratory. 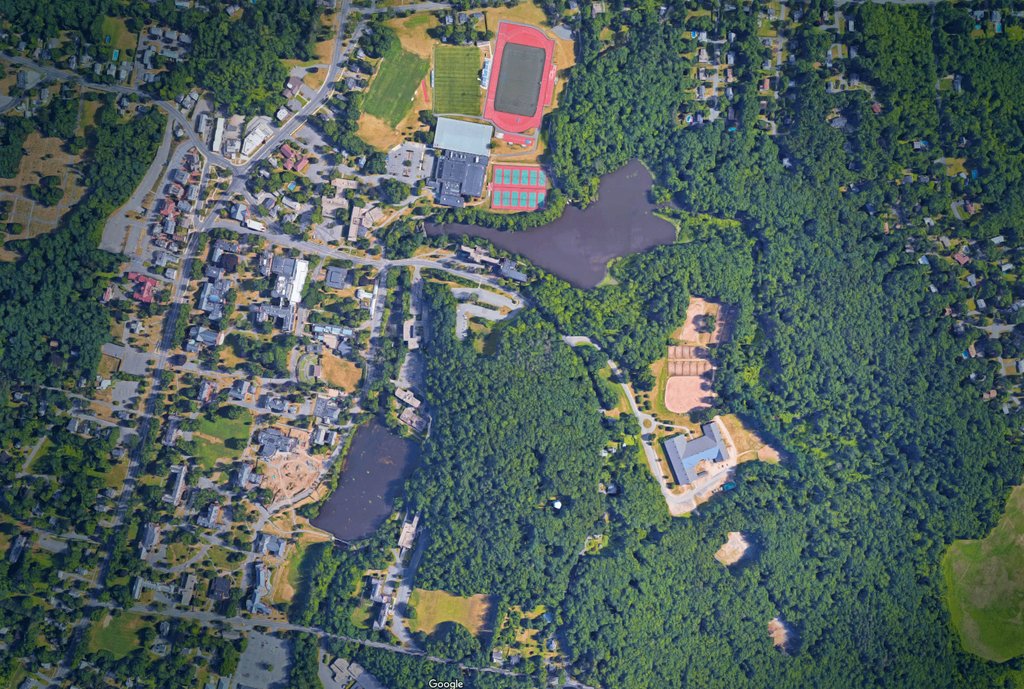 The Mount Holyoke campus has long served as a field station for student and faculty research. As a component of the living lab, the campus research center stores data on a rich array of environmental phenomena.

Using the Institutional Data Archive (IDA), those affiliated with Mount Holyoke or the general public may access both faculty and student research data, reports and other materials, including a collection of historical and contemporary campus maps.

In particular, students may view, download and use data collected from more than two dozen courses and many more independent student projects and then conveniently upload and store their own research, thus contributing to this vast body of knowledge for future student endeavors.

On IDA, the data collected in the campus living lab are split into three sub-communities:, Environmental Monitoring, Sustainability and Environmental History.

More than 300 acres of our campus comprise a rural, undeveloped landscape of lakes, streams, forests, marsh, shrub wetlands, forested wetlands, and vernal pools, making it an ideal setting for environmental learning and exploration. These habitats are home to hundreds of animal species, including beavers, otters, American eel, coyotes, several species of amphibians and around 80 species of birds. These diverse environments and life forms exist in close proximity to areas of rapid development, providing students with opportunities to study a variety of ecological processes and their responses to human activities.

Students work with faculty or with Miller Worley Center staff to monitor weather, water flow, water quality, forest composition and biodiversity — and build upon a network of pre-existing datasets in these areas.

Prospect Hill, once known as Goodnow Park, was an open field around the end of the 19th century, when it was acquired by Mount Holyoke. The transformation of this land began in 1882, when trees were planted according to the plan prepared by the landscape architect Ernest W. Bowditch from Boston. A great variety of trees were planted, among others: Austrian and Scotch pines, Norway, Oriental and Englemann’s spruces, many kinds of oaks, individual specimens of Western catalpa, Kentucky coffeetree, and Cucumber tree. The most numerous were pine, oak, larch, beech, birch, spruce, and hornbeam. Later, around 1910, the park was neglected and the hill became increasingly forested. In 1991, Hurricane Bob, a category 2 with maximum sustained winds of 115 mph, hit western Massachusetts and Prospect Hill. The major tree blow-down was observed on the southern part of Prospect Hill. In 1992 tree forest plots (25 x 25 m, South, Middle and North) were set up on the Prospect Hill to observe the tree succession recovery on affected areas. Since then yearly DBH measurement are taken on each plot.

Long term forest monitoring data about how the size of the trees on Prospect Hill have changed over time is available on the Institutional Data Archive. 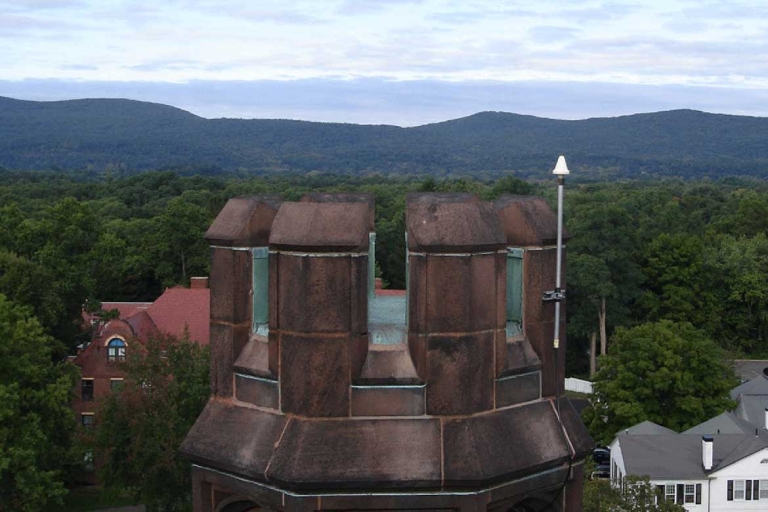 Mount Holyoke College hosts five weather stations to investigate the differences in campus microclimates: one on top of the Clapp Lab building, three on Prospect Hill and one near the Project Stream restoration site around Upper Lake. Variations in climate within small geographic areas, or even between the top and bottom of a leaf, are important to a variety of organisms.

Data from these weather stations are used in class lab projects and group projects by students for independent or thesis work on campus, and by faculty for research. We expect to find differences in microclimate due to variations in the ability of various types of vegetation to hold heat and buffer wind.

The weather station at the Project Stream site collects data every 10 minutes on variables such as wind speed and direction, temperature, soil moisture content and relative humidity. Current conditions are available to view.

Water quality monitoring data have been collected at various locations in the Stony Brook, Upper Lake, Lower Lake and the tributary stream to Upper Lake (Project Stream) on the Mount Holyoke campus biweekly from 1996 to present day.

The campus lake system has been identified as excessively high in certain nutrients, causing eutrophication in both Upper and Lower Lake. Through consistent water quality sampling by dedicated staff and the various student-faculty restoration efforts around campus, students are able to monitor the health of this important campus ecosystem and contribute high quality data to their own independent projects or coursework. 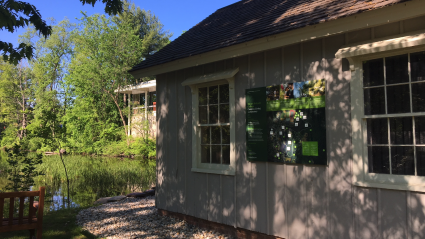 The Miller Worley Center maintains a water level sensor and datalogger at the pumphouse primarily to monitor Stony Brook water flow, as it is vital for the ecological health of both Upper Lake and Lower Lake. This sensor regularly measures the water level of Stony Brook and calculates the flow, and also has air temperature sensors and a rain gauge. Current conditions are available to view.

The Restoration Ecology Program offers a one-of-a-kind experience for undergraduates to engage with the growing field of restoration ecology — starting with restoring a wetland above Upper Lake to improve the health of the College’s beloved lake system.  The real-life restoration project was named Project Stream.

Learn more about the research taking place at Project Stream. 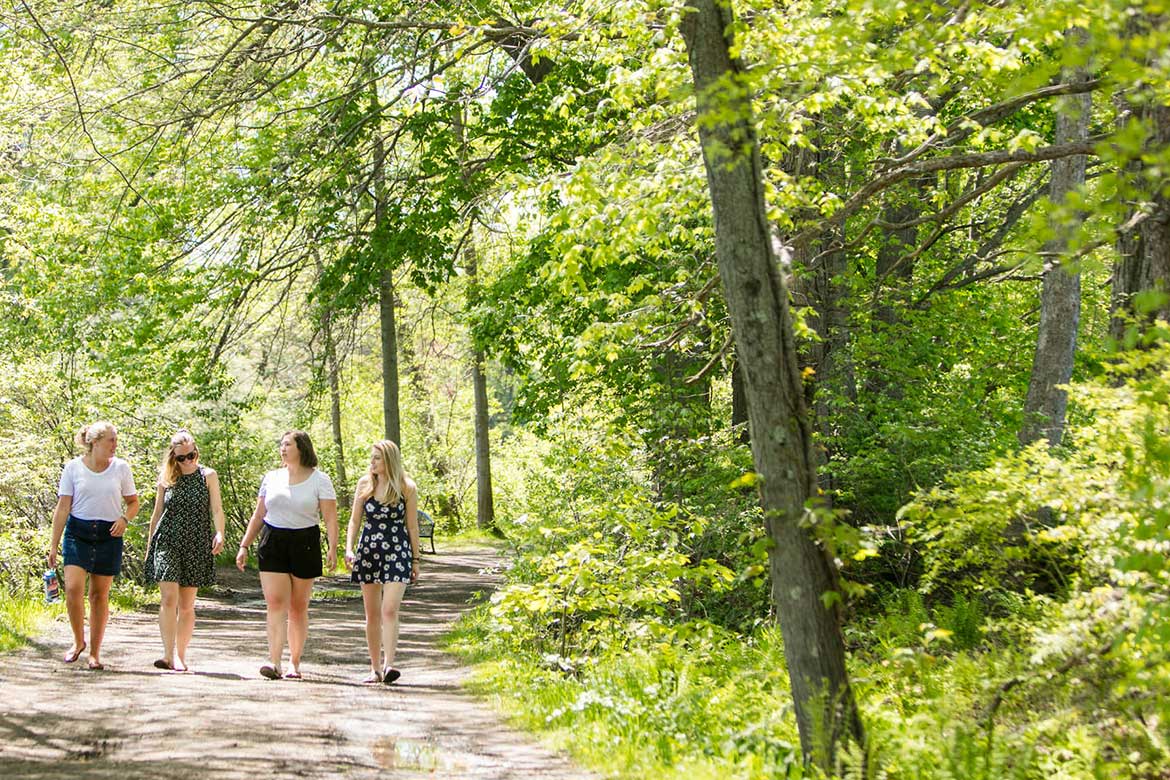 The campus trail system grants access to the various ecological sites located within Mount Holyoke’s living lab, and provides students and the larger community with miles of trails for both recreation and learning.

Learn about the trails on campus 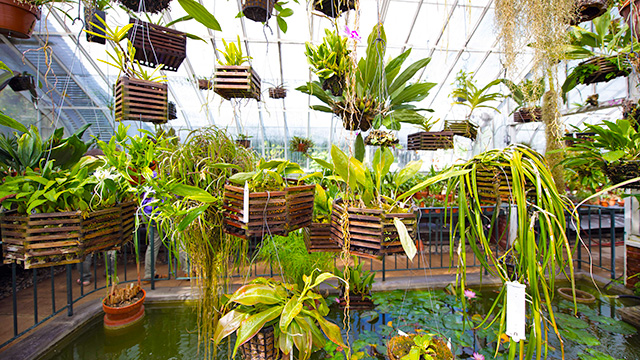 The Botanic Garden provides students and faculty with an exceptional interdisciplinary academic opportunity by serving as a plant-based resource for education, research, conservation and inspiration, and is an integral component of the Campus Living Laboratory.