The inspiration for building a robot dog.

During my school breaks, I spend a lot of time teching at various animal hospitals across the South Shore of Massachusetts. At the Randolph Animal Hospital, which doubles as the town shelter, I have the pleasure of working with the resident stray dogs and cats. As a future shelter vet, this aspect of my job is especially important to me.

In the summer of 2017, when I first started as an intern at the clinic in Randolph, I met an American pit bull terrier named Rollo. He had been living at the shelter since the previous December, when he had been found roaming the streets, super skinny and covered in bite wounds. It soon became clear that he harbored a fear of other dogs, and this, combined with a slew of health issues, made it hard for the shelter to find potential adopters.

Long story short? I fell in love with Rollo.

Despite his problems, my partner and I adopted Rollo in November 2017. Although he has made amazing progress since joining our family, and his medical problems are completely resolved, Rollo still struggles with dog reactivity. We started taking him to special behavioral classes, where dogs with similar issues can practice socialization skills.

Such desensitization classes normally begin by subjecting the dogs to life-size plush models and then rewarding them for any good behavior. The dogs then work up to interactions with other real dogs. But since Rollo is incredibly smart and was not at all fooled by the plush model, the only way to effectively train him was to expose him to real dogs. Doing so easily set him off and created a stressful environment for everyone involved.

But we kept at it, stress and all, until I started taking a class at Hampshire College through the Five College Consortium. The course, Animals, Robots, and Applied Design, challenged students to study some aspect of animal behavior through the use of an original robotic prototype. 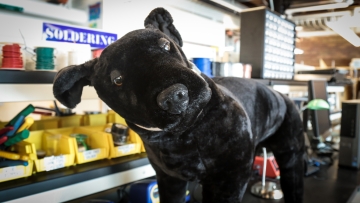 From the start, I decided to create a realistic dog robot so that Rollo — and other dogs who suffer from reactivity — could practice socializing with a safe mobile “friend.” I envisioned a robot with two key signs of submissive friendliness in dogs: a calmly wagging tail and ears that occasionally move from the top of the head to lie gently against the neck. With my instructor’s permission, I took to the Mount Holyoke Makerspace — since expanded and renamed the Fimbel Maker & Innovation Lab — to start my project.

To ensure the highest level of realism possible, I bought the same stuffed animal that trainers typically use, a life-size Melissa & Doug black lab. To bring the body parts to life, I took three servos, or little rotating motors, and attached planks of wood that were long enough to extend to the robot’s moving parts. I programmed the servos, using an Arduino circuit board, to move at specific speeds: The two for the ears move slowly from the top of the head to the neck, wait a minute, and then return to their original position. The tail servo moves at a constant slow speed. So that the robot would be easy to turn on and wouldn’t have any wires poking out, I then soldered battery packs and switches to each circuit. 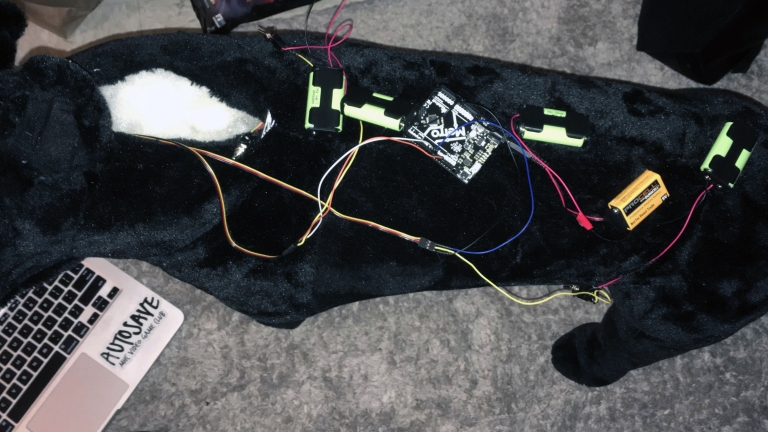 Once I finished these electronic components, I installed them by carefully cutting open the model and removing some stuffing. I sewed zippers into the “skin” to allow for further adjustments to the servos. Finally, I hot glued black felt eyelids over the model’s eyes, which were unnervingly wide and could unsettle real dogs.

Since dogs have an amazing sense of smell, I also brushed one of my professor’s dogs and spread the excess fur over the model. I then attached a used collar from the same dog to the robot dog. In this way, Simon the Safer Socializing Bot (S3B) was born. Watch a video here.

A starting point: perception plus practice

To test S3B’s efficacy, I coordinated interactions between it and three other dogs, including Rollo. Each of the dogs reacted to the model as if it were another dog. While this means that Rollo is afraid of S3B, we can now practice desensitization training in a safe way at home, without involving another dog.

Rollo’s reactivity, while not cured, has noticeably improved in the weeks since S3B’s completion: Rollo no longer barks when he hears the neighbors’ dogs and can watch them out of our windows much more calmly. My partner and I both feel more confident about introducing Rollo to other real dogs and hope to attend more desensitization training with him soon.

One of the greatest challenges facing animal shelters today is adopting out dogs that require extra effort on the part of the adopter — dogs that are shy, reactive or have other special needs. To help minimize this obstacle, I hope that S3B can act as a starting point to help heal shelter residents that have dog reactivity.

I am so excited to see where I can take this project once I start veterinary school in the fall. And I’m deeply grateful to both my Hampshire instructors and the staff of Mount Holyoke’s Makerspace for helping me bring my idea to life.