For the Mount Holyoke College community, 2018 was marked by an extraordinary plurality of voices, accomplishments and celebrations. Some highlights:

Sonya Stephens was inaugurated as the College’s 19th president after serving as acting president for two years. Speakers at the September ceremony included some of Stephens’ former colleagues and mentors as well as representatives from the College community.

Speaking on behalf of the faculty, Amy Martin, director of the Weissman Center for Leadership and Professor of English on the Emma B. Kennedy Foundation, said, “How do we welcome someone who is already such a central member of our community, who has devoted herself tirelessly and fully to the mission of Mount Holyoke, to an inclusive women’s education, to the liberal arts, and to advocating passionately for the continued relevance and vital importance of what we do and who we are?” 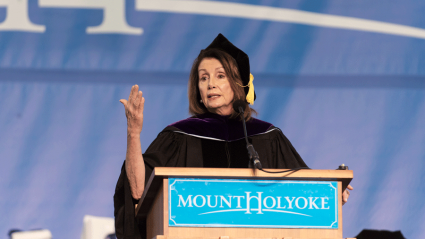 2) Nancy Pelosi in the (Field) House

Before she reclaimed her title of Speaker of the House, Nancy Pelosi spoke at Mount Holyoke’s 181st Commencement and received an honorary degree. In the fall, the congresswoman from California inspired the students of the inaugural MHC Semester in D.C. program, calling herself “an honorary member of the Mount Holyoke family.” Absolutely.

This year, as part of The Plan for Mount Holyoke 2021, the College committed to carbon neutrality by 2037. The effort to reduce its carbon footprint builds on the College’s focus on training the next generation of environmental leaders and fostering a campus culture of sustainability. One of the College’s most visible actions? A partnership with the South Hadley Electric Light Department to install solar panels on the Field House. 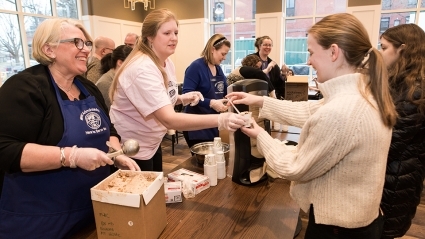 The completion this year of Mount Holyoke’s new Community Center began with the opening of the Dining Commons, the renovation of Blanchard Hall and the creation of the Weissman Student Commons. Among the first official events held in the new space was the unveiling of the College’s official ice cream flavor, M&Cs. 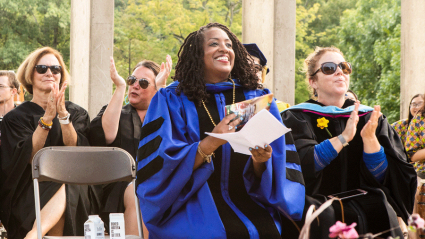 Kijua Sanders-McMurtry became the College’s first vice president for equity and inclusion and chief diversity officer. Among her first duties was speaking at Convocation. She joined another new hire this year, Shannon DaSilva, the new Title IX and 504 coordinator. 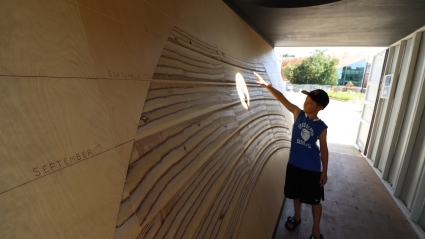 The many highlights of Mount Holyoke faculty included the naming of Kerstin Nordstrom (physics) as a Cottrell Scholar, architecture’s Naomi Darling’s art installation at UMass Amherst (pictured), a $1.5 million grant from the National Institutes of Health awarded to Andrea Foulkes (math), and Andrea Lawlor’s (English) acclaimed new novel, “Paul Takes the Form of a Mortal Girl.” 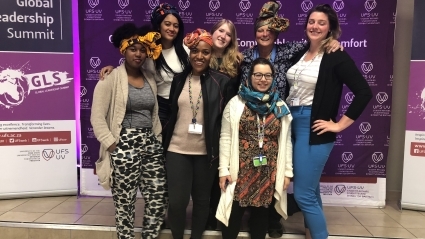 Mount Holyoke students and alumnae participated in the Global Leadership Summit in South Africa (pictured). Students racked up prizes at competitions in neuroscience, business ethics and entrepreneurship. Twenty-eight student/athletes were named to NEWMAC Academic All-Conference Teams this fall. And Linda Zhang ’20 won the Kathryn Irene Glascock ’22 Intercollegiate Poetry Competition, marking the second year in a row that the prize was awarded to a Mount Holyoke student. 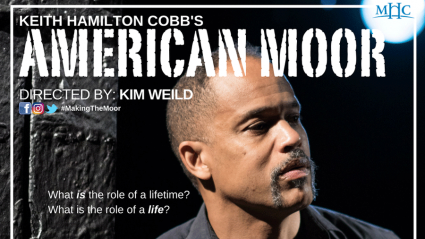 8) From the world at large 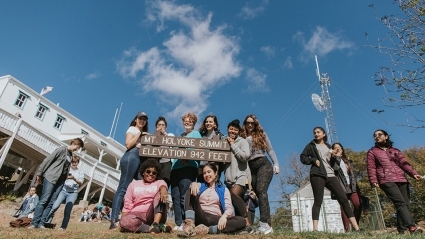 Bonus: Mountain Day 2018, Mount Holyoke’s first and most beloved tradition, was a joyous success worldwide for the entire College community, students and alumnae most of all.

Mount Holyoke lights the way in 2019. Watch the video