For Eliza Lumen FP’24, her independent study project was a chance to do anthropological field work in southern Italy, studying folk dances, their complexities and diversity, and how the changing climate might impact them.

For N’Yshma Suza Leroy ’23, her independent study was an opportunity to “focus on the shift in a poet’s mood and emotions before and after yoga and meditation.”

These three were among the 179 students presenting insights and experiences from their summer internships, research and independent studies at this year’s annual LEAP (or Learning From Application) Symposium, Mount Holyoke’s largest signature event showcasing student achievement, which took place in the College’s Science Center complex on the afternoon of October 21.

Many of the students saw their summer efforts funded by the College as part of The Lynk program’s commitment to enable all students to have meaningful internship and summer research experiences.

One key component of LEAP is the division of students into four-person panels to present their work. These panels don’t just give students a chance to discuss their summer experiences with others on their panel; the groupings also provide attendees with a fascinating opportunity to delve into intriguing issues. This year there were 43 panels.

“Being in the field really helped me to see the realities of fieldwork and how much I love traveling and making connections.”

With panel titles spanning from “Perspectives on Information Accessibility” and “Scientific Internships: Short Term Roles in Long Term Research” to “Focus on the Human Mind” and “The Dirt on Dirt,” these hour-long sessions gave a bird’s eye view of the far-reaching power of a Mount Holyoke education.

Both Leroy and Lumen were participants on the same panel: “Twenty-First Century Ethnography: Spirituality, Multiculturalism and Kinetics,” which brought them together with other students who also focused on some aspect of ethnography.

Lumen’s summer examination of folk traditions looked at the evolution of dances over thousands of years, from dances based in agriculture to the Dance of the Spider, the Tarantella Pizzica, which grew from Bacchic cults.

Of course, the environmental studies and anthropology double major from nearby Easthampton, Massachusetts, could not study dance without actually dancing.

“I had just arrived in an eastern village in the Seven Sisters mountains in Avellino,” Lumen said, “and I had just made a friend who was my guide in the area who insisted, upon my arrival, that I join her and her friends and attend a concert and dance evening. I was so tired from traveling, but I was there to do exactly this. How could I say no?”

After this summer of studying these ancient dances, Lumen walked away with a new perspective on anthropology.

Leroy, a poet, a psychology major, and an entrepreneurship, organizations and society minor from Medford, Massachusetts, by way of Grande Rivière Du Nord, Haiti, looked at the effects of yoga practice on her creative process.

“Fall of junior year,” she said, “I surrendered myself to yoga and meditation practices. Spring of ’22 I noticed a shift in my grades, in my habits and in the ways I affirmed myself. I decided that I wanted to further study myself due to the profound changes from fall ’21 to the end of spring ’22. As a poet I wanted to see how meditation and yoga shifted my mindset through writing.”

Beyond consideration of how meditation influences poetry, another result of this intense self-study was an idea for a possible career.

“As an entrepreneurship, organizations and society minor,” she said, “I also thought about going into the nonprofit field. I would like to open a mindfulness arts center for people in my hometown Grande Riviere Du Nord, Haiti. With my psychology degree, I want to further my yoga certificate and become a yoga therapist.”

Her work involved tracking down what happened to nearly 400 scholarship recipients who, since 2006, gained funding through ACM-W to attend conferences. A computer science major from Daejeon, South Korea, she conducted data analysis and visualization for a potential longitudinal evaluation of the effect of the scholarship on recipients’ educational and professional trajectories. What did she find? Among other things, she found that tracking down 400 emails is hard work. On the plus side, she “got to know senior level women in computing and network with them — their career is my career in five years.” She is now considering graduate school as opposed to going directly into business.

“At its core, we want students to reflect on their summer learning with their classmates. We ask them to think about synergies between different kinds of experiences and academic fields.”

Panel discussions are essential to the spirit of LEAP, noted Eleanor Townsley, Andrew W. Mellon Professor of Sociology and director of the College’s Nexus Program, adding that LEAP participants take a course, College 211, Reflecting Back on Your Summer Internship or Research Experience.

“We offer a series of assignments with the goal of facilitating interdisciplinary conversations and introducing new knowledge,” Townsley said, “and we do it in a way that connects their time at Mount Holyoke with life and career after they graduate. At its core, we want students to reflect on their summer learning with their classmates. We ask them to think about synergies between different kinds of experiences and academic fields, and we ask them to listen to each other to build a larger picture about what all the summer experiences mean together.”

Townsley also pointed out how the panels exemplify Mount Holyoke’s academic breadth, saying, “This year I was particularly struck with the number of research presentations across disciplines, which ranged from frank reflections on working as an embedded engineer to an ethnography of Italian dance forms that are changing in response to environmental pressures; mathematical simulations of mosquito flight which shape the spread of disease; the excavation and publication of historical government records to inform current urban policy in Harlem, New York; algorithmic analysis of cancer cells to help with earlier detection of cancer; genetic research for pharmaceutical development; and so many more.”

“Student accomplishments are real and inspiring,” she added. “I enjoy seeing the work in every corner of the intellectual community that Mount Holyoke makes possible. It reminds me of why I like teaching at Mount Holyoke so much.”

For Professor of Anthropology Joshua Roth, who moderated Lumen and Leroy’s panel, his role is to let the students take the lead during their presentations.

“My approach to moderating these panels is to keep out of the way as much as possible and let the students shine,” Roth said.

Of course, in addition to moderators, panelists and on-campus attendees, this year’s LEAP featured something not seen on campus for a while: friends and family members.

For Deborah Wilson of Bozeman, Montana, the chance to watch her daughter, religion major Emi Wilson ’23, present her summer work was “perfect.” “I was so involved in watching her internship in progress because it was virtual. I’m very excited to see her present,” she said. Wilson’s experience as a MoZone social justice peer educator gave her the foundation to work for CoJourn, an innovative program aiming to provide people with avenues for personal growth and deeper connections.

For James Kidd it was wonderful to see his daughter, Charley Kidd ’23, present on her summer working in Boston’s small but robust film industry. “I enjoy watching any of my children prosper and have the confidence to present,” he said.

Film, media, theater major Kidd, of Northampton, Massachusetts, described how she used her already existing network from her career in acting and applied the skills she learned in video production classes at Mount Holyoke to take another step that will help pave the way for a career in film. The day-to-day responsibilities of her work with Hop Top Films as a production intern were wide-ranging, including building a hut for Bigfoot for the short film “Awakened.”

And for history major Anna Sophie Tinneny ’23, seeing her parents in the audience was special.

“It was great to see some friendly faces in the crowd and to share with them,” she said. Her independent study focused on studying the oral traditions of an Indigenous community in Santa Ana, Ecuador.

Her parents, Heather and Brien Tinneny, traveled the 244 miles from Chalfont, Pennsylvania, to South Hadley that morning to watch their daughter — making impressive time to see an impressive presentation. 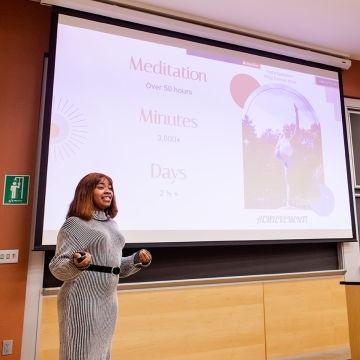 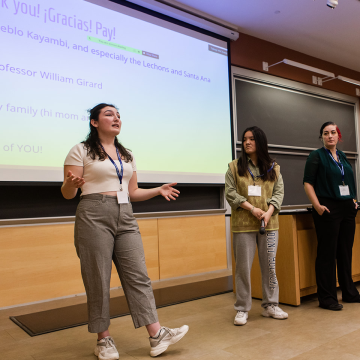 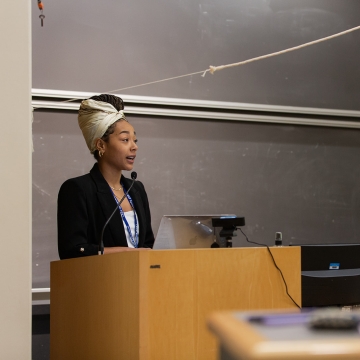 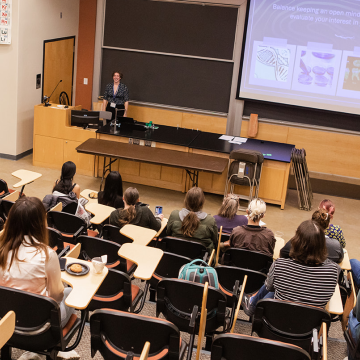 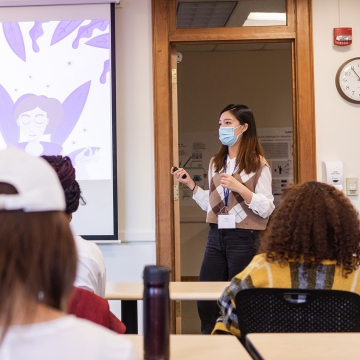